Where to get Makgeolli in Singapore?

It is basically the only unpasteurized makgeolli that you can buy in Singapore. While not having much of a choice, it is however a tasty, refreshing and recommendable standard makgeolli . You can buy Kooksoondang’s Saeng Makgeolli for example at Koryo’s Lottemart in Telok Ayer Street. Make sure to specifically mention or look for “Saeng” or 생 to make sure you get the unpasteurized version.

Prices range from SGD 8 to 10 per bottle which is around USD 6 to 7. Don’t be surprised, alcoholic drinks are generally expensive in Singapore. Makgeolli is not significantly more expensive than a bottle of beer in Singapore.

Most of the 7-Eleven stores that we visited also carried one pasteurized makgeolli brand, Jinro’s “Makgulli”, most likely targeted at Korean businessmen on business travels.

Also there are some online shops that sell makgeolli (incl. Kooksoondang’s Saeng Makgolli), for example at Geonbae.

With only one unpasteurized makgeolli brand available in Singapore, it is an absolute delight to find Joo Bar in Singapore close to Bugis Junction (view Google maps here). It is the only makgeolli bar Singapore brewing their own fresh makgeolli and serving modern anju. 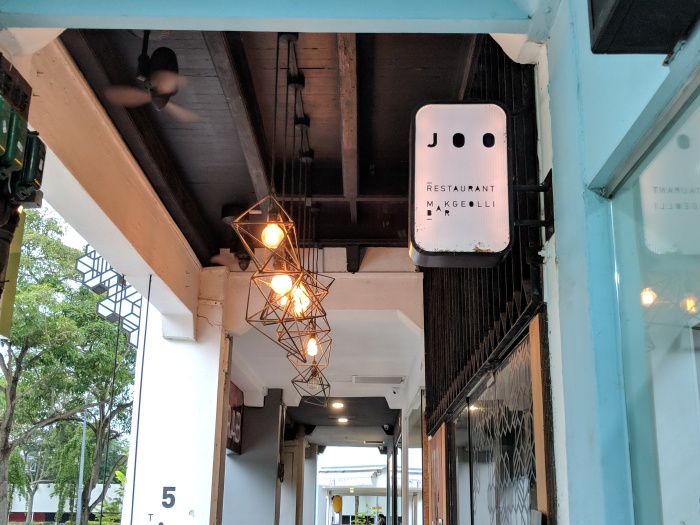 Their makgeolli is offered in its original format and with freshly prepared flavour versions, incl. banana, white grape, litchi, wild berries and many more served ice-cold. It’s a very honest and refreshing brew slightly sour and sweet in flavour.

Price of a 0.5l kettle of normal makgeolli was SGD 18 and flavoured versions cost SGD 22. They offer the normal makgeolli for SGD 10 during happy hours (5:30pm-8pm). Again, while it might sound expensive, for Singapore it is pretty standard and was worth every cent. Joo Bar unfortunately does not serve fresh makgeolli from other brewers as an alternative to its homemade brew.

To summarize, for makgeolli lovers craving for fresh unpasteurized makgeolli, Singapore has only two but very good options: Kooksoondang’s Saeng makgeolli, quite easily found in Korean grocery stores and restaurants and a craft brewed fresh makgeolli at Joo Bar.